Once sit, down, stand and heeling have been taught, it is time to move on to the motion exercises. The first part of these exercises is the "stay". Typically in Schutzhund / IPO, we do not use a separate command for the stay, once we have given a command for a position, we expect the dog to remain in that position until we give them another command. Nevertheless we need the dog to maintain those positions before we can start training the motion exercises. Stays are trained like any other behavior that requires duration, by randomly changing the length of time before reward, starting with a second or two and gradually working out. You can also proof each position by marching in place so the dog begins to learn that even when the handler is moving, he must stay put.

Once the dog understands to maintain his position until released, the next stage of training the sit in motion is to ask for heeling, take a few strides in heeling, and give the dog the command to sit. At this stage, do not leave the dog - rather, give the command to sit as you stop. Similar to above, if the dog sits and maintains his position, give him the release command and reward. At the beginning of each new step, do not ask the dog to hold his position for very long. As you increase the number of repetitions, you can ask the dog to hold the position for longer periods.

Once the dog sits when the command is given without you moving onward, and can maintain his position at your side, you can move on. The next stage involves asking for heeling, moving forward for several strides, giving the command for sit, and taking one step forward and turning in front of the dog (other trainers will refer to this as blocking the dog). At the end of this series, you should be standing in front of your dog (who is, hopefully, sitting and looking up at you expectantly). If he is, reward him, you can reward him in place with food or release him for a toy (what a good boy!). Similar to the steps above, perform this series of actions until the dog's behavior is consistent, stable, and can be maintained.

Note: Keep in mind that if your dog is sensitive to your actions, do not look him directly in the eyes (this, in dog terms, is considered a challenge and will encourage him to shift, lay down or move away - in other words, your body language will be undermining what you are attempting to train which is a stable sit). In this situation, teach yourself to either look over your dogs head or to look at his nose.

Note: Similar to the note above, be careful if your dog is sensitive to your movements (most, to a greater or lesser extent, will be). In this case, you will need to make the degree of movement, especially behind the dog, very gradual. You will be able to tell if you are pressing too hard if the dog becomes unstable or shifty in his sit. If this occurs, take a few steps back in your training and, after several repetitions, start again.

The final stage of training these exercises consists of adding two things: distance and a recall (each one at a time). First, add distance to the exercise by taking two, then three, and onward strides before turning to face the dog. In competition, the handler is required to take 15 or 30 steps from the place the dog sits and this, plus some for comfort, should be your goal. As you extend outward, keep returning to your dog prior to release. Keep in mind that in competition, the sit in motion is completed after your return to your dog (in other words, there is not a recall in this exercise). As a result, most trainers will advise you not to teach the sit in motion with a recall at all. Again, as I tend to cross-train for AKC as well (where there is a recall from the sit position similar to that of a sit in motion), I train a recall from all of the motion exercises including the sit in motion. Similar to the above, start with short recalls and move them out. In order to prevent the dog from anticipating the sit in motion, I tend to recall him only about 1 in every 4 or 5 repetitions of the exercise.
The down in motion and the stand in motion are taught in an identical fashion.

Note: It is important that the dog have a solid understanding of each position before you start teaching the related motion exercise.

Because you will have your back to the dog for long periods of time, it is critical that you get someone to help you - they can let you know when your dog is moving when your back is turned. The clever animals can quickly discover that they can sneak a couple of steps or a quick shuffle forward when your back is turned and you may never know. If no one is available to help, use a physical item (clump of grass, leash on the ground, line in a parking lot) to make the spot you give the command and compare this to where the dog is at when you turn around. It is not uncommon to see dogs take several steps while the handlers back is turned and be perfectly still after the handler turns around - this is evidence of a training problem. 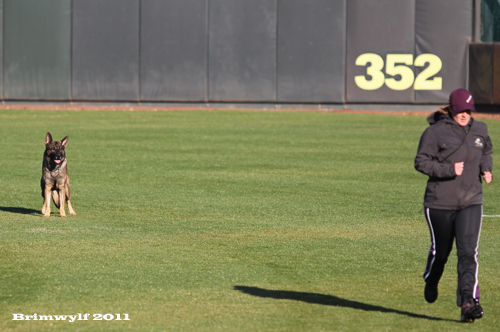