The Schutzhund dog must learn to control himself while "in drive". In basic obedience training, most dogs are taught when they are calm and in a low distraction environment. Usually distractions are added later in training and the dog is expected to ignore them. In this way the dog is gradually de-sensitized to environmental distractions. When clicker training we often choose a reward that the dog enjoys but not so much that he gets incredibly excited. This level of excitement (or arousal to give it it's more technical behavioral term) can be a barrier to the dog learning what the handler requires.

Now in Schutzhund, we like the dog to work "in drive", to be in an excited state. This helps to get the points for power and speed that the judges look for. It also creates a nice picture of a dog joyfully working for his handler. The dog must learn to work and to respond to commands even when his primary focus is on a toy or even a helper.

So it is a good skill for a puppy to learn to control his excitement or to "cap" his drive. A good way to teach this is on the way in and out of the house / crate / kennel. The pup is excited to get in or out and is probably whining, clawing or jumping at a door. To begin with, just wait until the pup puts his front paws on the ground, he certainly won't be calm, but at least he is not ruining the paint work! This will be quite difficult at the beginning, and will take longer if the pup has already been jumping at the door for several weeks! Gradually the pup will learn that jumping does not earn him what he wants. Keep the target behavior simple to begin with, you don't want the pup to become completely bored and out of drive before you release him

Later when commands have been taught, you can give the pup a command like sit. He soon learns that even though he is excited he must pay attention to the handler. This of course is essential in protection training later on but is also very useful in normal situations, for example; the dog may get very excited when there are a lot of other dogs around. It is not always practical to avoid these situations. It is also not always possible to gradually de-sensitize the dog to these situations. Far better to have a dog who still pays attention to his handler even when he is excited. 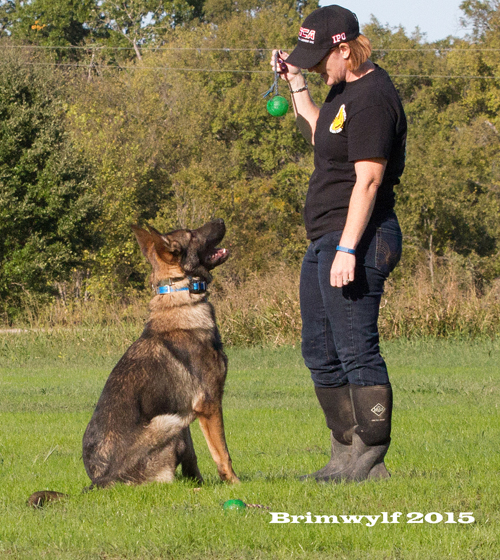